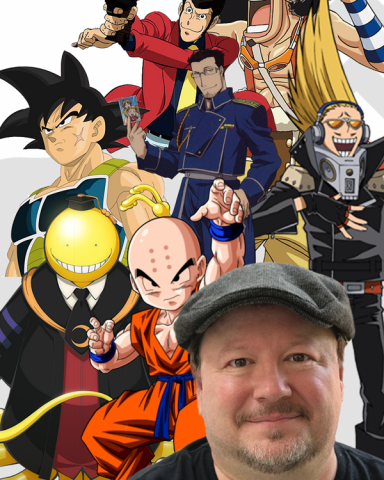 Most recognized as the voice of Krillin on the animated TV show Dragonball Z and as an illustrator for, arguably, the most famous, independently published comic book series Elfquest. Sonny Strait has over 20 years of experience in the arts.

As a voice actor, Sonny is considered to be one of the most recognized voice actors in the business. Besides Dragonball Z’s Krillin he has worked on many popular animated characters including Maes Hughes from Full Metal Alchemist, Usopp from One Piece and Cartoon Network’s laid back, robot host Toonami Tom. He has also worked as a writer and director on several TV series including Dragonball Z, Case Closed and Lupin the Third.

As a comic book artist he has 17 published works to date including his debuted self-published series Mr. Average featured in The Comics Journal and Elfquest which was published by both WARP Graphics and DC Comics. Sonny is considered one of the top Elfquest artists from its over 30 year history. Recently, Sonny has reprised his roles in both the new Dragonball Z Kai and Full Metal Alchemist: Brotherhood series and plays the title role in the Xbox game S’plosion Man.