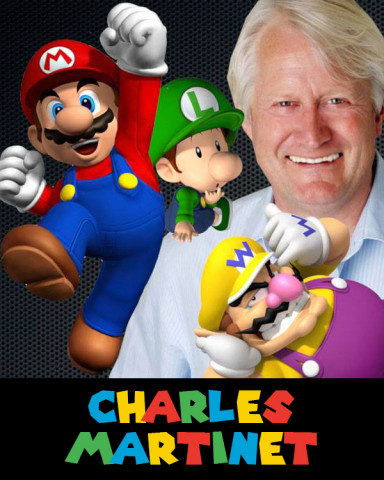 Charles will be signing autographs all weekend at his guest booth. He will also have a panel – day and time to be determined.

Charles Martinet is an actor and voice actor. He is best known for voicing Mario in the Super Mario video game series. Martinet has voiced this title character of Nintendo’s flagship video game franchise since 1990, and he also voices related characters such as Baby Mario, Luigi, Baby Luigi, Wario, Waluigi, and Toadsworth.

In addition to video game voice overs, Martinet has worked as a voice actor in commercials, cartoons, and promotions. At the Electronic Entertainment Expo (E3) trade show in 2005, Charles (as an Animal Crossing character) could be found roaming the virtual village featured in the playable demo of Animal Crossing: Wild World. Martinet did Mario’s voice as the announcer for Pac-Man Vs. on the Nintendo GameCube.

Other than the Mario series, Charles has also done work for the video game Cel Damage as the voice of Fowl Mouth, as well as the primary voice work in several educational game series such as LeapFrog.He also voiced the Paarthurnax in the 2011 video game The Elder Scrolls V: Skyrim, Orvus in 2009’s Ratchet & Clank Future: A Crack in Time, and narrated the cutscenes and menus for the 2013 video game Bit.Trip Presents… Runner2: Future Legend of Rhythm Alien.