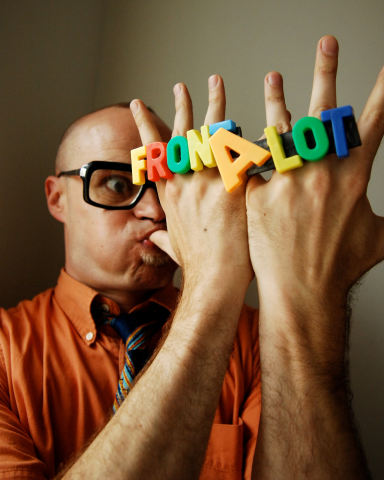 Front was born in San Francisco and grew up in Berkeley. He was tall and scrawny, had trouble breathing, and could not see well. A special teacher was called in to help him attain basic competence on the monkey bars, another to give him standardized tests meant for older children. Thusly, he was the most popular kid in his elementary school. Just kidding! He got pushed down a lot and called “nerd.” Did he maybe even deserve it? I mean, really – who strikes out at kickball?

He spent the next twenty years or so trying to get over it. And kind of succeeded! Flash forward to 1999: the dotcom bubble is maximally inflated; nerds everywhere imagine themselves to be popular and/or hip. Damian is getting overpaid to code web pages, which leaves him free in the evenings to play with audio software. A longtime idolizer of rappers, he has been committing his own esoteric hip-hop compositions to four-track tape since high school, revealing them to nobody. But, suddenly! Multi-track desktop studios, cheap pro-grade recording hardware, skyrocketing bandwidth, semi-anonymous web publishing: these factors converge on Damian’s rap hobby like a flock of winged monkeys. He posts an MC Frontalot web page, dubbing his output “Nerdcore Hip-Hop” because his audience is composed of several Star Wars figurines who live on his desk (and also random internet people who click on his MP3s by mistake).

Now it is 2021. Nerdcore has metastasized into an internet phenomenon and underground touring powerhouse, with dozens of well established live acts and hundreds of home-studio rhymers self-identifying within the subgenre. MC Frontalot, called alternately the movement’s godfather or grandfather (thanks, kids), leads the charge, performing for thousands around the country and at prominent geek gatherings such as Comic-Con, DEF CON, the Penny Arcade Expo and BlizzCon. He’s been featured in The New York Times, Spin, Wired, XXL, Newsweek, CNN, Blender, XLR8R, USA Today, Entertainment Weekly, The London Daily Telegraph, NPR, G4TV, Esquire, Playboy, CMJ, The Guardian (UK), The Wall Street Journal, and scores of city papers nationally and internationally. He has released seven studio albums, Nerdcore Rising (Sept 2005), Secrets From The Future (Apr 2007), Final Boss (Nov 2008), Zero Day (Apr 2010), Solved (Aug 2011), Question Bedtime (Aug 2014), and Net Split, or the Fathomless Heartbreak of Online Itself (March 2019). The documentary feature, Nerdcore Rising: The Movie, which focuses on Front’s live band and exposes the the Nerdcore phenomenon in general, debuted at the South By Southwest Film Festival in 2008. Front lives in Berkeley, CA, and still spends most of his time rapping into a computer.